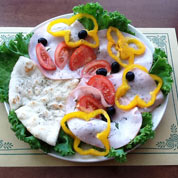 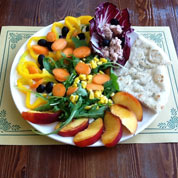 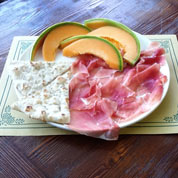 ... the flour of our mills, the waters of our sources and lard of our "sacred" animal, the pig: the fruits of Bologna plain in a concert of flavors that melt together, in a wood-burning oven, in an ancient product: the Spianata Bolognese. Easy as its tradition, the peasant, but a little 'sophisticated as its city, Bologna. Suitable as by origin as pleasant alternative to bread, as a filler, as necessary on the table, until to reach the rank of main actor of the meal when it is filled with flavors that harmonize all in unison in a poem of taste absolutely bolognese ...

Flour, water, yeast, salt and a bit of lard.

Is it for sure protagonist of the table.

A slice of sausage, a grilled vegetables, a cheese find today new stimuli being sandwiched between two strips of Spianata. Is not a pizza, it is not a flat bread, is not a hamburger, it is nothing usual, is the Spianata Bolognese.

Properly stuffed with salami and cheese is a generous plate, with vegetables is a virtuous snack and attentive to calories, with Nutella is a sin of gluttony.

A real snack, a mini Dish that satisfies us but do not weigh us down, a real take-away Italian style, with all the flavor and quality that we deserve.

Contact us and request information for the Spianata Bolognese!